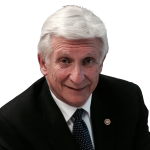 Is the CEO at Ansercomm, a telephone answering service which he took over 50 years ago.  Tony is member of the Garden State Rotary Club of Cherry Hill and has held multiple roles within the group.  Rotary plays a huge role in Tony’s life as their main charitable cause is the cure of Polio.  Tony was stricken with Polio as a child growing up in London during WWII.  He moved to the States as a young boy, became a citizen after completing high school and purchased Ansercomm at the age of 22 in 1964.

Under the tutelage of Tony, Ansercomm has grown into one of the premier answering services in the world.  In 1964, when Tony went into business in downtown Mount Holly he had a one room office with 5 employees and 35 customers. A half-century and a telecommunications revolution later, the genial Moorestown resident is the president, chief executive officer, and sole owner of Ansercomm, a telephone-answering service with 50 employees, 1,000 customers, and operations in Maple Shade and South Florida.

If you're looking for Answering Services,
please use the form below.
If you are looking for Employment,
please visit our Careers page. Thank you.